Drinking and Driving in College

Facts and Statistics on Drinking and Driving 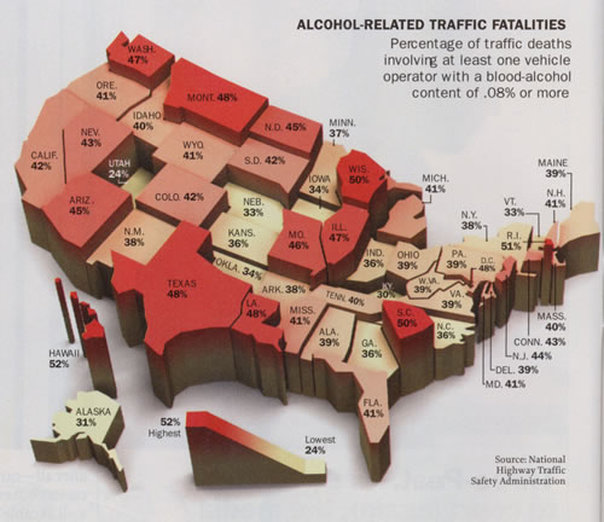 General Facts and Statistics on Drinking and Driving:


90% of All Drunk Driving Happens After Drinking With Family, Friends, and Coworkers. There is almost always somebody around who could be part of the solution. Don't let drunk driving happen right in front of you.

-Adults drank too much and got behind the wheel about 112 million times in 2010 - that is almost 300,000 incidents of drinking and driving each day.

-Of all 50 states in the US, Texas rates the highest for total-alcohol related fatalities per year.

-Over 1.41 million drivers were arrested in 2010 for driving under the influence of alcohol or narcotics.

-Every 2-hours, three people are killed in alcohol-related highway crashes. The consequences of drinking and driving are arrests, property damage, injuries, and thousands of deaths each year. An estimated 4 million U.S. adults reported driving under the influence of alcohol at least once in 2010yielding an estimated 112 million alcohol-impaired driving episodes. Men accounted for 81 percent of these incidents.

Facts and Statistics on College Age Drinking and Driving:

Excessive alcohol consumption and binge drinking among college students continues to represent one of the most serious public health problems confronting the college campus and the surrounding community. This raises serious questions to cities nationwide, including Lubbock.In a study taken by over 650 college students, despite knowing the ramifications of drinking and driving, an overwhelmingly amount of college students partake in this activity. Results showed consistently that peers overestimated the participant’s ability to operate a vehicle.

- 1,825 college students between the ages of 18 and 24 die from alcohol-related unintentional injuries, including motor vehicle crashes every year.

- 599,000 students between the ages of 18 and 24 are unintentionally injured under the influence of alcohol

-About one-half of all fatal traffic crashes among 18- to 24-year-olds involve alcohol, and many of those killed are college students. Further, data from SAMHSA show that an estimated 18 percent of drivers age 16 to 20—about 2.5 million adolescents—drive under the influence of alcohol.


What Does This Mean?

Almost 19 percent of drunk diving accidents are caused by the doing of college age kids. In which a good portion of those are under age the age of 21 that are  drinking and driving. The likelihood of a drunk college age student driving in Lubbock community is without question. It is happening all around us. Everyday, every weekend. This is a major concerning issue for the community at large and the University. Although this problem cannot be completed dissolved, further actions can be taken by the University to ensure the safety of students and the general community when it comes to drinking and driving.

I conducted first person research and asked two simple questions to my 80 person study: are you of age to drink (21) and have you driven while intoxicated. This survey was done on Texas tech University's campus to college students and the results aren't far from what one would think. As you can see from the results below, 84% of the people I asked have driven after drinking, whether of age to drink or not. 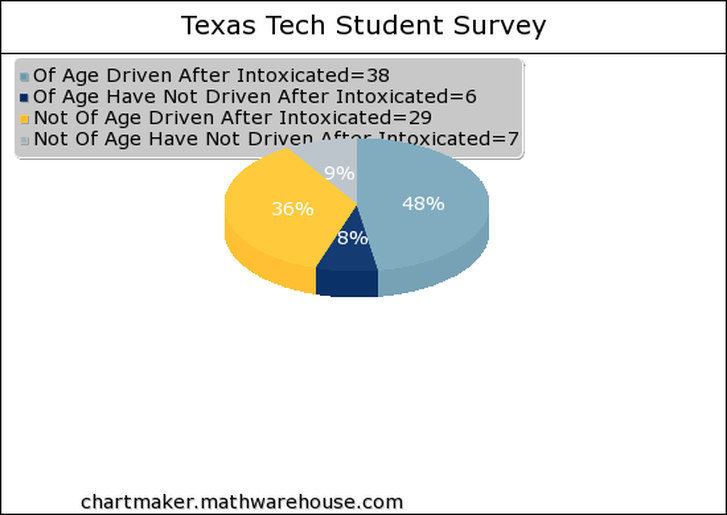